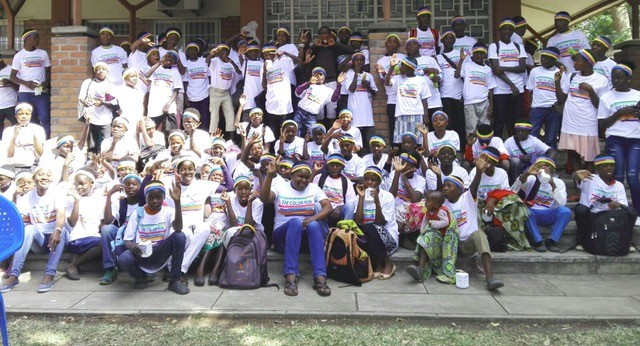 HomeDREAMDREAM’s commitment to the teens of Malawi

On a warm summer’s day, Ak. is seen leaving his neighbourhood smiling and greeting everyone he knows: “I am going to school! Hooray! I am going to boarding school!”.
Ivy and Maureen went to pick him up early in the morning to take him to a residential school that an Italian family has provide for Ak.
He still cannot believe it. Up until last year he couldn’t go to school, he didn’t have anything to eat, he didn’t have money to pay for transport to the DREAM center…

He is one of the many teenagers currently being treated at DREAM centers. For over a year now Ivy and Maureen had been noticing that his treatment was no longer effective, that he wasn’t taking his medication properly and didn’t attend his check-ups, so they decided to investigate the situation.
Fatherless and abandoned by his mother who suffered from severe mental illnesses, he lived for a period with his aunt up until he was accused of being a child-witchdoctor and of causing his father’s death, and was sent away. He became one of the many street children that roam the urban centers of Malawi. Many attempts to have him live with a few relatives were made with the help of the DREAM operators, but after a few months he would again be sent away, suspected of being the reason behind the family’s ills, scarce rain, diseases or economic problems. He was told: “it would be best if you died and ended up in the cemetery with your father”.
Maureen, one of the coordinators of the DREAM center in Blantyre who never ceased to look for solutions, managed to get help from sister Matilde: she gives him something to eat at the end of the lessons, sometimes accompanying him to his check-ups and helping him with his medication.

Teenagers are amongst the most difficult patients. After an initial success during their childhood, therapy often stops being effective due to scarce adherence.
Almost a thousand teenagers are being treated in the DREAM centers in Malawi. Many are orphans, but even having a careful and supportive family doesn’t make persuading them to regularly attend therapy any easier.

Adolescence is a difficult age under every aspect. You become aware of yourself and you begin planning your future, which isn’t easy when your life has been scarred by AIDS since birth. Many questions pile up in the teens’ minds. How will my life be? Will I be able to marry, have children? Why should I bother studying if I am sick? Will I have to do therapy for the rest of my life? These are complicated matters even for an adult, and can be daunting for a teenager, especially when lacking emotional and social stability.
This is often hard for parents or relatives, who do not know how to talk with their children about their disease. Mothers usually feel guilty of having transmitted the virus to their children and, due to ignorance or a feeling of inadequacy, avoid a serious conversation where they explain why daily therapy is necessary.
It is easier dealing with children, as a simple excuse can suffice such as “…this medication is for the anemia…” or “…to prevent malaria…”. With teens it is harder.

Oftentimes the teens find out about their condition by chance, it could be from a classmate who notices the regular and frequent absences due to the medication and begins teasing them.

In countries where HIV is endemic, adherence to treatment remains an open challenge for all teens. For this reason the DREAM centers in Malawi have begun addressing the seropositive teens’ situation directly to offer them better support.

Following a few lessons with personnel about the various aspects of adolescence, a specific analysis of all patients aged 10 to 17 was carried out. An investigation followed, verifying if each teen had been informed of their situation and if so, how. Subsequent meetings were organized to help and educate the parents or legal guardians on how to talk to their children about the diagnosis.
For example explaining that universal access to treatment was not available during the pregnancy and stressing how the parents have always looked after the children, taking them to the hospital for treatment and helping them grow, contributed to reestablishing trust between adults and teens.
For the most complex cases, showing an increase in viral load after years of good health following the therapy, the decision was to carry out a targeted intervention with the assistance of an activist as a reference point, with frequent visits to the home put in place in support of the whole family.

Next, the “Saturdays for teens” began. Part of the health personnel of the DREAM centers volunteered to dedicate the last Saturday of each month to the inauguration of the center, creating a special day of activities for the teenagers. This has a very positive impact on them as they no longer have to skip school (there are no lessons on a Saturday), and being surrounded by their peers makes them feel at home.

On a Saturday the situation is completely different: hundreds of boys and girls “seize” the centers. From very early in the morning until closing hours kids can be seen playing chess, soccer, talking amongst each other, snacking together and participating in health education meetings organized by the personnel.

Feeling part of a group is very important at this age. It can give strength, courage, enthusiasm and will to live. Sometimes older kids who were once teenagers of DREAM are invited on a Saturday. Their story is an example of success, both socially and therapeutically. Kids such as G and F who have recently married, with G now working as an electrician in an important company of the country.
The more “Saturdays for teens” organized, the more boys and girls started coming back to the center, even when they didn’t have medical checkups. They realized they weren’t alone in the challenge against the virus, while making friends along the way. The group also helped take care of children coming from impoverished social situations such as Ak.

Being together as part of a group and having a family who embraces you leads to new perspectives and opportunities to make new friends, such as T and R. They both had long hoped to take a trip and see all the animals roaming the Malawian Savannah. And just like that…chipping in for a few months to pay for the transport fees to the Chickwawa wildlife reserve in the south of the country…preparing sandwiches for lunch…a little help in obtaining preferential access to the reserve and…on 4th November 2017, 75 kids took a trip to discover their country, which tomorrow will surely be a better place, also thanks to their contribution in building a more humane and inclusive society.