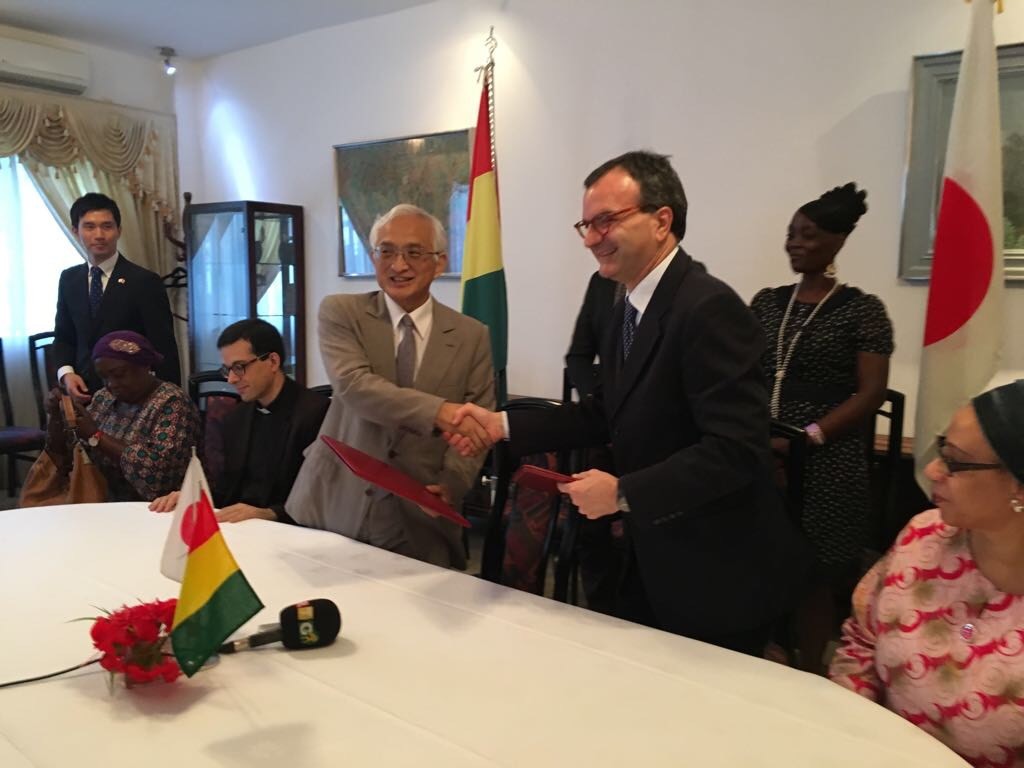 A new agreement was signed on 15 March between the Japanese Embassy and the Community of Sant’Egidio for the construction of a new DREAM center in the city of Dubreka, located about 60 kilometers from the country’s capital, Conakry. The suburban area of Conakry is undergoing an intensive urban development program which is slowly enveloping the city in the urban fabric.
Rent prices are very high, leading many people to look for a home further away from Conakry’s city center. Consequently, the prefecture of Dubreka, which is mainly a rural area, is witnessing a high population growth. DREAM began working in the prefecture of Dubreka seven years ago, when the decision was made to rent and renovate a small building thanks to a small contribution by UNAIDS. The UNAIDS project was started with the intent of providing about 30 HIV+ women with the prevention program impeding the mother-to-child transmission of the HIV virus. It slowly grew larger, encompassing 300 patients who are currently being treated free of charge by DREAM. The small center was inaugurated in September 2011 by the Première Dame and met with local celebrations.

The center currently opens once a week and is part of a network of “satellite” centers built by DREAM to reach patients which reside far from Conakry’s center (a second center can be found in the prefecture of Coyah, and another inside the maternity ward in the Matoto neighborhood in Conakry). These centers can benefit from the work of the molecular biology laboratory, located in the main center in Conakry, which includes the daily transport of blood samples and mobile medical teams who guarantee the same consultation and drug delivery standards found in all of the centers.

The wish to strengthen DREAM’s presence in these areas and particularly in Dubreka can be achieved by building this new center, assuring increased stability and daily presence to the local patients.

The center will be built on a plot which was bought a few years ago thanks to a donation and which was awaiting support in order to begin construction. The signing of the agreement marks the start of this project, which is expected to be completed within the next 12 months.

The ceremony, which took place in the residence of Ambassador Hisanobu Hasama, saw the participation of a few representatives of the institutions which accompanied DREAM’s story in Dubreka and in Guinea in general: the UNAIDS representative in Guinea, Dr. Dado Syd Gnakassi, the representative of the Première Dame Foundation, Mme. Traoré, the segretary of the Apostolic Nunciature in Guinea and the coordinator of the National program for the taking charge of HIV/AIDS representing the Ministry of Health. It was an occasion to thank who, in their own way, supported DREAM in its efforts to offer a free quality treatment especially to the people living farthest from the capital. Special thanks went to the Episcopal Conference of Italy for its contribution to the DREAM program over these years, the Eight per thousand and the Papal Foundation, as well as the state of Japan for this new collaboration

Relations with the country have strengthened also following the projects launched in Mozambique through the Japanese Embassy in Maputo, which allowed the construction of the health center in Matola dedicated to women, while the construction of a new DREAM center in the neighborhood of Zimpeto is almost completed.