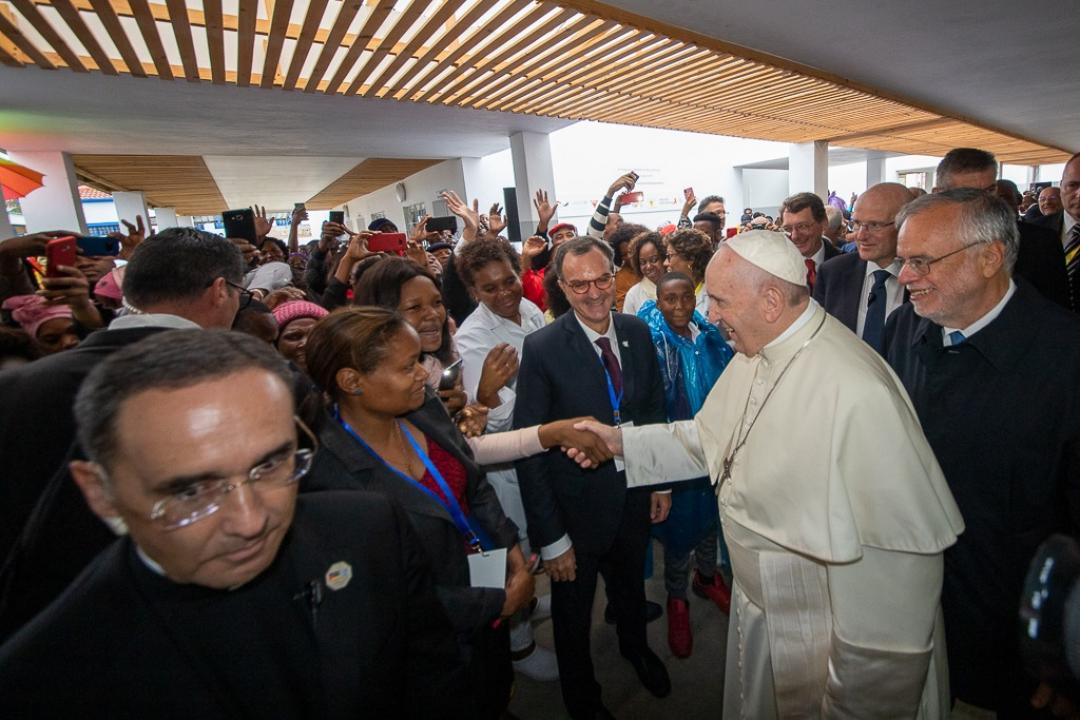 A day of hope and joy for the people who met Pope Francis on 6th September, when he visited the DREAM healthcare centre in Zimpeto, Mozambique.

The Pope was supposed to arrive at 8.45 am but he is unpredictable and at 7.30 am they said “he’ll be there in three minutes”. Anxiety, joy, excitement; mixed emotions. The wait was over. Francis was on his way. Everything was ready at the DREAM centre in Zimpeto and the rain that did not look like stopping, did not however stop the nearly two thousand people who were there and could not wait to meet Pope Francis. There were women wearing capulanas, the typical Mozambican lengths of fabric, with the image of the Pope printed on them, elderly people, children waving coloured handkerchiefs in the air, and men. Everyone was waving flags and rehearsing songs and dances just before the visit. Many of them, actually most of them, were HIV patients in treatment at the DREAM centre and they represented the triumph of life over sickness. The healthcare programme is so proud of them. Paola Germano, who is in charge of the DREAM programme explained that in 2002, when DREAM started, the therapy was not available in Mozambique or in other countries in Africa. “For us this was unacceptable so we committed ourselves to creating a model that would make the global north and south equal, by guaranteeing access to the antiretroviral therapy and all round healthcare, free of charge”.

The Pope arrived and we, who were inside the centre, realised this from the shouts of joy and the songs that got louder. Andrea Riccardi,  the founder of the Community of Sant’Egidio, was there to welcome him together with Cacilda Massango, the coordinator of the Zimpeto DREAM centre, who is HIV+, but looking at her, you would never have thought it, she is a testimony of the importance and effectiveness of the treatment.  Andrea Riccardi greeted the Pope with these words: “Holy Father, it is a great joy for us to receive a visit from you in this house for so many sick people. This is a place where people receive medication, treatment and food free of charge but above all they receive dignity and friendship. Hundreds of thousands of HIV+ mothers in Africa have had the joy of giving birth to children who were free of AIDS. This is a wonderful experience for an HIV+ mother: a miracle! Today, the treatment is a dream come true. The Community of Sant’Egidio treats over 500,000 African patients, but it all started here in Mozambique ”.

Cacilda is the DREAM programme’s greatest result, but in her words: “the babies born healthy to HIV+ mothers, they are the greatest result. What seemed impossible has come true and life is triumphant and smiles at the people who did not think it was possible”. Gianni Guidotti, the secretary general of the DREAM programme said this was a new generation of children who are the real hope in African countries.

Cacilda then underlined the importance of the activists, the women who once they have regained their strength, put themselves at the service of other patients and help them with their therapy. She says she herself was one of the first patients DREAM met and that she decided to give to others what was given to her.

The Pope embraces Cacilda and then speaks: “Thank you for the life you lead and your testimony, showing that this centre is a manifestation of God’s love, always ready to breathe life and hope where death and suffering abound”. He thanked everyone who was there and seeing the love, professionalism and competence with which the sick are welcomed, referred to the parable of the Good Samaritan. “You did not just walk past here. This centre shows that people stopped and felt compassion, they did not give in to the temptation to say “nothing can be done, it is impossible to fight this plague”, and you worked courageously to look for solutions. You listened to the silent cries of so many women, so many people living in shame, marginalised and judged by everyone. Making amends for these cries led you to understand that medical treatment, despite being necessary, was not enough, so you considered the problem as a whole, in order to give the women and children their dignity again and help them plan a better future”. The Pope also referred to the environment, an issue that he particularly cares about. At the same time, it was wonderful to see how the way he listened to the weakest people, the poor and the sick, put us in touch with another fragile part of the world, “I am thinking about the symptoms of disease that we can perceive in the soil, in the air and in living beings. One case of poverty, which is suffering from the greatest abuse and abandonment, is our oppressed and devastated earth. You have understood this and listening to it has led you to look for sustainable ways to provide energy and collect and store water. Your options that have a low environmental impact are a virtuous mode, an example to follow, given the urgency caused by the deterioration of the planet”.

Before he finished, he again thanked Cacilda and women like her, the children and all the people who can write a new page of history, free from AIDS, and all the people who can smile today because they have been looked after with dignity. So many people have emerged from the nightmare of illness without hiding, giving hope to so many people. That “I DREAM”, that DREAM is much more than an acronym, it is a true cry of hope that has touched so many needy people. Before giving his blessing, Pope Francis said, “Renew your efforts, so that we can continue to “let hope be born””.  The Community of Sant’Egidio then presented him with a crosier in the shape of a cross, made with the roofing sheets and straw from houses that were destroyed by the cyclone Idai that hit the Beira region in March, where the Community of Sant’Egidio is present and continues to give its support to the population. The Pope then met some sick people privately, he greeted HIV+ mothers who had given birth to healthy children and blessed the children.

Cacilda is emotional and happy, and at the end of Pope Francis’ visit she says, “Today will remain one of the most significant days of my life and of all the DREAM patients, not only in Mozambique but throughout Africa. It was an important historical moment in the life of all the women in the world with HIV. The Pope’s visit was a sign of great hope, we want to live, even more than before”.

Ambito
Woman to woman. The importance of counselling and the prevention of vertical transmission of HIVPrevention and treatment of non-communicable diseases in a new project of the DREAM programme in Mozambique
NEWSLETTER