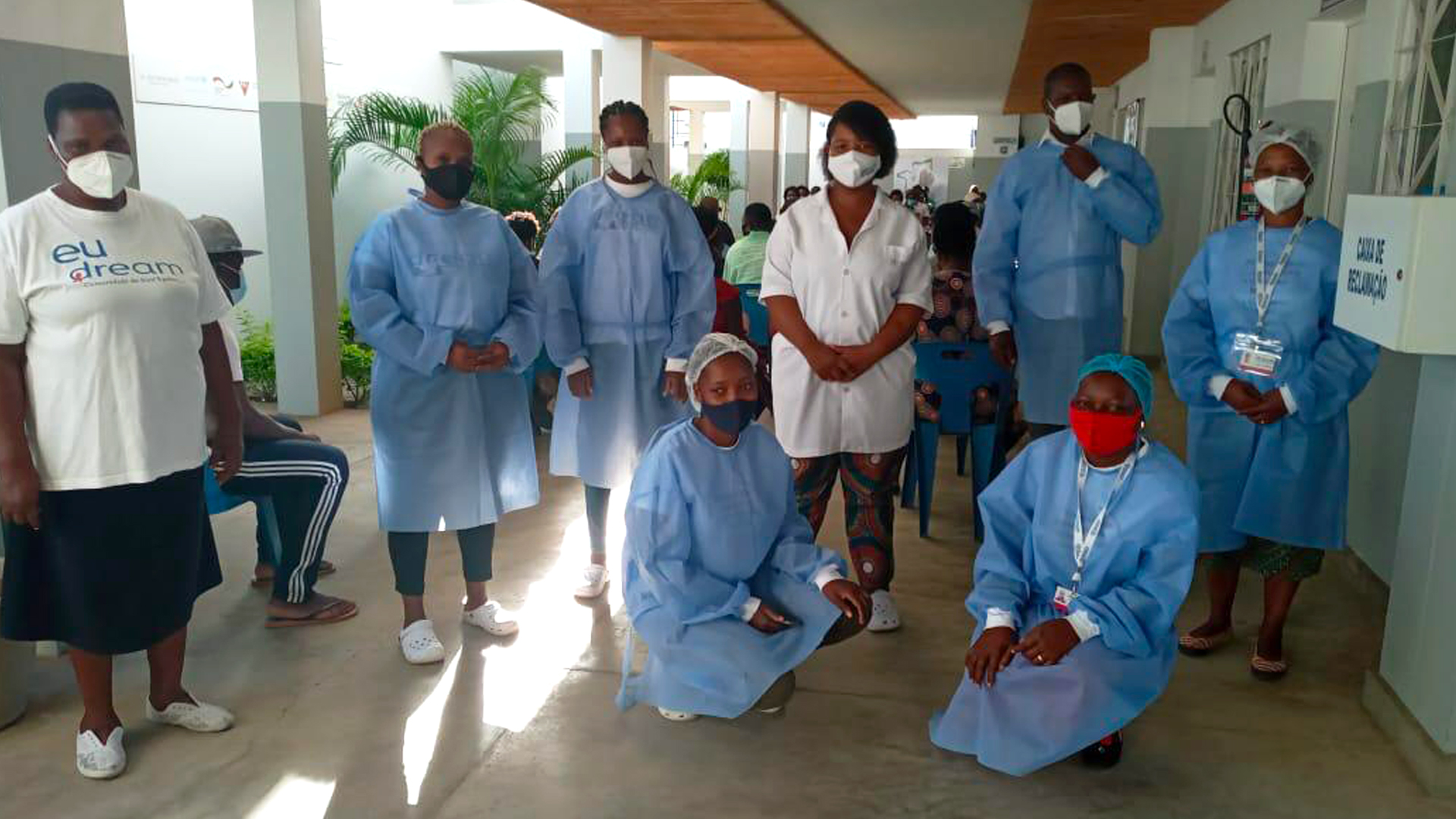 HomeDREAMCovid-19: dealing with the infection in Africa, the real challenge for global health

The coronavirus emergency in Africa. The Community of Sant’Egidio’s DREAM programme commitment. Interview with Paola Germano, the director of the healthcare programme.

What is the situation regarding the spread of the coronavirus in the countries in Africa where DREAM works?

DREAM operates in 10 countries and the situation is different in all of them. It is also important to bear in mind that there are very few opportunities to take the test, people die, and there is no way of knowing what caused their death. It is a completely different situation from in the West, where there are plenty of instruments and infrastructures, although not enough for this situation. In the 10 countries where we work, just over 2,000 confirmed cases have been reported, and there are less than 16,000 cases in the whole of Africa. The problem is that not many tests are done here, it will definitely spread more. No one really knows, but there is likely to be a great increase when winter comes, so the end of May, June, July.

What measures have the governments of these countries adopted to prevent and limit the risk of infection?

The first thing was to close the borders and put people coming from countries with infection into quarantine. Most governments have limited gatherings of people to a maximum of between 10 and 20 people and they are asking people to work from home, but in fact only a few people can afford to do that. The number of people in the markets is controlled, and in some countries the markets have been closed, but you see street stalls with a lot of people all standing next to each other. There is practically no public transport so in Africa people use small, usually overcrowded private buses. The governments have limited the number of people who can get on, and the police check how many people are on the buses. This has created a shortage of buses because a lot of private bus owners say they are not earning enough so it is not worth it for them. This means people cannot get to work or go very far. Only a few people can afford their own car, so there are no alternative ways to get around. Public ceremonies, mass, and meetings are prohibited.

In the countries where DREAM is present, many of which have a poor healthcare system, are the prevention measures implemented by European countries, including Italy, applicable?

The African governments have adopted our measures to a certain extent, in a softer way because it will be impossible to do it like in Italy. Even being isolated at home is completely different if you live in a township where the houses back onto each other. Furthermore, the indication to always wash your hands is pure theory in places where water is scarce, as is the obligation to always wear a mask. Being isolated means that a lot of people lose their work. A vast number of people live on informal work, with no salary. Adapting to the measures leads to hunger and protests have already started in some cities. It will be very difficult to adapt to Western measures in living conditions that are so different from ours, without this leading to hunger and riots.

In addition, there is the problem of the healthcare facilities: there are not many hospitals and medical centres, and not many doctors either, but above all they are inadequate. Clearly there are differences from country to country, but none of them have enough personnel. With the help of the World Health Organisation and the Centres for Disease Prevention and Control, small reference centres are being set up for the first people who have been infected, but this is only a few cases. We do not know if there will be the same figures in Africa as in Italy, but if this is so, there will be the problem of intensive care, which means not only the need to increase the number of beds, of which at the moment there are only a few, but also to find personnel who can intubate the patients.

Are there problems with supplying protective devices, like in Italy?

Of course, and it’s much worse than in Italy. The international donors, especially the Chinese, are trying to help by sending materials but the devices often disappear and are then sold at ten times the price in the shops. There are no masks for healthcare personnel In Mozambique, for example. The demand for materials is enormous and that Western countries that started buying three months ago, stocked up with what was available. This means that where there is a demand, it is difficult to provide the supplies needed.

Are the media in the countries spreading relevant news or are popular beliefs and fake news more common?

It depends on the country. Generally they are government newspapers, so they tend to downplay the emergency. In other countries, like in Malawi, people talk about fake natural or magic remedies. People are panicking, they have seen what is happening in Italy and they are terrified. A lot of people look for shortcuts or solutions in a widespread magic and naturalistic culture that seem more accessible and easier. The media often follow them. There is no serious scientific information.

What is the role of DREAM in managing the emergency in the countries where it operates?

It is an avant-garde role. First of all, DREAM has been dealing with infectious diseases for almost 20 years, with well trained personnel and advanced facilities. We have already been through this type of emergency with AIDS and then with Ebola. This gives us a great advantage because we are ready to face this emergency without having to make a huge effort, unlike the public health infrastructures. We also started preparing our centres for the virus two months ago, when people still thought it would not come to Africa because it is hot here, or that black people were immune to the virus.

How is DREAM’s ordinary work proceeding in this emergency situation?

First of all, the large number of people who came to the centres has been reduced by starting to give them their medication for three or 6 months, depending on the case. This is both in order to avoid large numbers of people gathering at the centres and also to let the patients avoid travelling too much on the buses, where they risk being infected. We have set up more check-ups on the telephone to monitor the patients, since they are not coming to the centre so often. These procedures are also safer for the healthcare personnel. We have clearly provided our staff with all the necessary protective equipment.

Every patient who comes to every centre is screened to identify the suspected cases and they are then quickly sent to the national reference centres, to avoid going to the hospitals, which is dangerous. In some countries, such as Mozambique and Malawi, due to the shortage of masks, our activists have started making them out of cotton to protect the staff and they also give them to the patients.

Moreover, the DREAM molecular biology laboratories can also do the covid tests because they have the right equipment.  At the moment the reference laboratories for the tests are the national ones but the number of cases is still low. When the virus spreads, more laboratories will be needed, which is what happened in Italy. We are ready and have told the Ministries of Health that we are willing to carry out the tests.

What is the appeal that DREAM, as a healthcare programme, can make to the international community not to abandon Africa at such a complicated time for everyone?

Never like this time, has an epidemic shown the world that we are all in the same boat. Widespread epidemics have often happened in poorer countries, which makes rich countries feel immune or at least indifferent to the suffering of so many people. This epidemic has affected all of us and has shown us that the virus knows no borders, and that globalisation is not only economic but that it also applies to diseases. Treating the population in one country and not worrying about other countries will not work, the infection crosses borders, it travels and it will not be possible to live an isolated life for ever. So this is a global problem, which can only be solved at a global level and not a local level. Of course, this will entail a greater economic effort for Africa, given the conditions of its healthcare facilities, which the international community, despite being itself in difficulty, will have to contribute to, otherwise they will find that the virus is back in the West again. This epidemic has changed our lives and those of our countries and probably for a very long time, and it has substantially changed our lifestyles. It will be difficult to go back completely. No one can save themselves alone in the face of this epidemic, whether we like it or not. This will have to be taken into account and we will have to work together so that the right to health is truly a right for everyone, so that everyone can live better.

Ambito
The NCD project. An interview with Fausto CiccacciCovid-19 in Malawi, DREAM in the forefront in preventing infection
NEWSLETTER