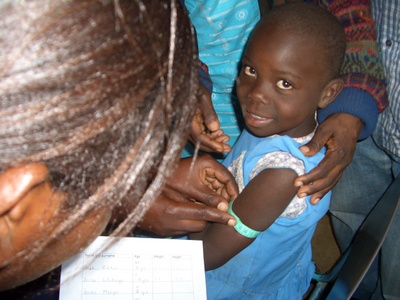 HomeDREAMHunger, malnutrition, AIDS: the commitment of the DREAM program

“No to the speculation in the name of the God named Profit “: says Pope Francis in his message, submitted to FAO by the Archbishop Travaglino on the occasion of the World Food Day. We are facing – the Pope says – one of the most dramatic paradoxes of our time: millions of people who have no food despite the huge amount of food wasted.

The data are clear: according to the latest FAO report of 2014 (The State of Food Insecurity in the World), 805 million people worldwide do not have enough food, about one out of nine.

The vast majority of the hungry live in developing countries, where the prevalence of malnutrition is estimated to be around 14.3%. Despite the fact that at a global level there has been a general reduction in the number of undernourished between 1990-92 and 2012-14 (reduction in the prevalence rate from 18.7% to 11.3%), there are still too many differences between the various regions of the world. The Sub-Saharan Africa remains the region with the higher prevalence of malnutrition (approximately 24%, with 214 million malnourished). In practice, it is estimated that one in four people is chronically malnourished.

The situation of children is concerning: in the world, 200 million children are malnourished; of these, 160 million are in a condition of chronic malnutrition.

Once again, Africa has the dubious distinction: the prevalence of stunting and underweight among children under five years of age, has increased to 30%. According  to the WHO it is too much.

The lack of food leads to growth retardation with often irreversible consequences on the physical and intellectual development of the child as well as it leads to an increased risk of death and of developing serious illnesses, contributing for about 45% of all deaths worldwide, among children aged under five years.

Being malnourished amplifies the effect of any disease, including HIV so that there is an overlap of the regions affected by HIV and those affected by malnutrition. This coincidence is very evident in sub-Saharan Africa, where the lack of nutrition and food insecurity are daily realities. HIV / AIDS and the food crisis combine to form a vicious cycle: malnutrition lowers immunity and increases the risk and severity of infections. It is clear that good nutrition does not cure HIV / AIDS, but it is a therapeutic aid, essential and complementary to antiretroviral therapies. And it is also emphasized by the WHO (detail): the HIV infection is a global infection of the body and requires global action; nutrition, along with antiretroviral therapy, should be a key factor of these actions. Therefore, in sub-Saharan Africa a special attention to the nutritional problems in HIV positive patients should be given.

Since the beginning, the DREAM program of the Community of Sant’Egidio, has associated a complete nutritional support  with the antiretroviral therapy for those patients who need it.

In its 12 years of activity, DREAM has delivered more than 865,000 nutritional supplements to patients of all ages, many of them children. For the younger, (seropositive or exposed to the virus) who showed signs of severe malnutrition, therapeutic, high calorie nutrition supplemented with macro and micro-nutrients was delivered.

In addition, the DREAM program operates three feeding centers for children in the age of development, built by the Community of Sant’Egidio and coordinated and animated by the work of community health workers, who specialize in nutrition and early childhood education.

In Matola, on the outskirts of Maputo, more than 800 children receive a daily full meal, more than 500 in Beira, in the central region of Mozambique, and more than 800 in Blantyre, Malawi. Food and drugs allow all indexes of nutritional development to achieve normal values. The association of nutrition and therapy has yielded extraordinary results and has saved the lives of many but, unfortunately more and more often we are witnessing a donor fatigue that, due to the international economic crisis, considers superfluous to fund nutrition programs. Yet we are faced with a scandal, as pointed out by the Pope, stating that hunger and malnutrition are not an inevitable fact: “Hunger and malnutrition can never be considered a normal occurrence to which we get used to, as if it were part of the system” and added “we need to renew the food systems in order to bring into them the value of solidarity with the poor. We need to educate ourselves to solidarity. “

Pope Francis then stressed that it is necessary, especially nowadays, to find unity among people and among nations to overcome divisions and conflicts and in particular “to look for concrete ways out of a global crisis since the poor are the ones carrying the greatest burden” and concluded by stating the availability of the Catholic Church in assisting not only the development but also the practical implementation of new policies, conscious of the fact that “faith is made visible by putting into practice God’s plan for the human family and the world, through the real and deep brotherhood that is not exclusive to Christians but which include all people.”

To rediscover the brotherhood of nations, “teaching us solidarity,” is a proposal that must touch the hearts and minds of our global world, still too hungry and that suffers not only due to the economic crisis, but a lot also for the lack of solidarity.