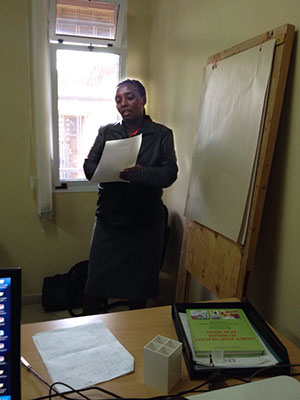 HomeDREAMAlong with care … I learn English

Since June 2014, in the DREAM centers of Iringa and Usa-River (district of Arusha) in Tanzania, patients do not come just to be treated but also to learn English.

In fact, it is already active the project “Breaking down the language barrier”, financed through the Fund Otto per Mille of the Waldensian Evangelic Church. The aim of the project is to contribute to improve the condition of women in Tanzania and therefore to provide to 120 women (60 per each center) a service of free teaching and qualified basic English language in a year.

In Tanzania the DREAM centers treat about 3,000 patients, many of which are women, often poor, jobless, with other family members sick, pregnant women or mothers of sick children or with problems of malnutrition.

Kiswaili is the official language of Tanzania, but often English is essential to find a good job especially in the fields of economy and tourism. However, the level of English varies greatly depending on the area and the level of education and its learning is a desire of the women themselves.

During the first months of the year, when the courses started to be offered to some of the patients of the centers, there was immediately a great enthusiasm and they have started a quick word of mouth to invite other friends.

In a short time the numbers to form classes were created and in June the courses began, both in Iringa as well as in Usa-River.

Classes are held in the DREAM centers, during the early hours of the afternoon, when the flow of patients is less; 4 classes of 15 people each have been formed and lessons are held four days a week.

The women come from far away, but it was possible to facilitate their participation, thanks to a contribution for transportation, provided by the project. Their willingness to learn is great, and now that the first half of the courses are finishing, the results become visible: arriving to the center, instead of the usual Karibu! (Welcome), the greeting is immediately “Hello, how are you?” and, happily, they continue the conversation in English.