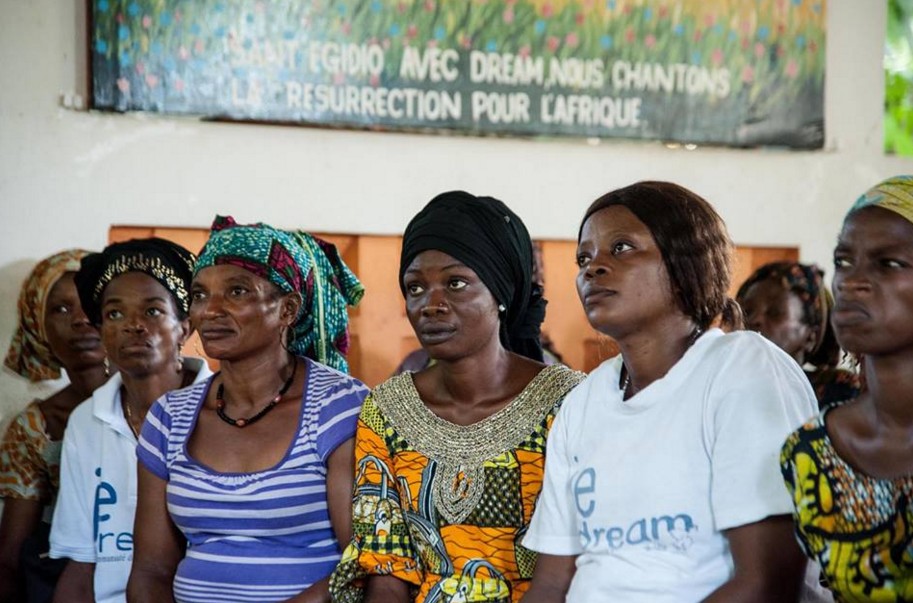 HomeDREAMDREAM: not only treatment, but also the culture of living together

About thirty people meet under a paillote to talk and listen. Some are Christian, most of them are Muslim. They have known each other for years and they are friends. They are mostly women. Once a month some of them visit a prison in the suburbs where about one hundred men are clumped together in a single room. When they manage to find clothes or food they bring some to them, but they often find themselves empty-handed. So they pass by for a friendly visit, to say hello, to collect telephone numbers of distant or oblivious relatives who do not know of their conditions, to weave broken bonds. Others regularly visit a group of children in a small orphanage, also located in the suburbs. It hosts about thirty children, among whom some are HIV-positive.

They are not rich. Some of them actually have very complicated stories coming from poverty, but most of all from the disease which represents even here a further reason for women to suffer from marginalization and stigma. But they do not seem neither sick nor sad. The undersecretary of foreign affairs and long standing member of the Community of Sant’Egidio, Mario Giro, visited Guinea and met with these women, in the DREAM center in Conakry.

The conversation begins with their lives and their experiences, but it later extends to the big topics of coexisting among different ethnic groups and religions. Important topics, which affect the everyday life of everybody. In the capital’s neighborhoods, where Christians and Muslims live side by side, stories are heard of war, migrations and attacks. A few days ago another “brother state” was the victim of an attack, carried out by three young kids, who were barely twenty years old that left 30 dead. “You can no longer go to Europe if your name is Ousmane or Fatoumata, you need to change your name…they don’t want Muslims over there”. They narrate about a mild discomfort, as if the winds of violence were blowing, but were muffled also in this country by a rooted tradition of coexistence, which is not always easy. And the question that comes to mind is a fundamental one: what is it that divides? There is just one God for everybody. It is almost like entering a theological terrain and discussing what it is that defines the great monotheistic religions.

Stories, wishes and feelings overlap under the paillote of the DREAM center.

There is a great wish to understand, to listen carefully, but also to testify a friendship that can go beyond diffidence and diversity. It is already a reality faced and tackled together on a daily basis when treating the sick, Christians, Animists, Muslims, Peul, Soussou or Kissi, abandoned women – also those hidden by a thick black veil, showing only the eyes – orphans and teenagers who wish for a “normal” future, even if they are sick.

At the Christmas lunch there is a feeling of affection and happiness in seeing a little boy who has his eyes wide open looking at the gift containing his first pair of shoes, or from the gratitude coming from the prisoner who this year finally managed to eat some meat.

The experience of your own weakness being accepted and healed when you find out about your disease, or the moment when you find yourself alone because of it; a place such as the DREAM center of the Community of Sant’Egidio becoming everyone’s home; the awareness of the fact that your own life is still long and that it is useful not only for yourself but for others too; the conscience of not being alone…all of this jointly continues to bring people together with their personal stories, culture, religion and different ethnicities.

It is a path that seems too simple to many, the path of friendship, of respecting different faiths, of equity and of rights (to health, culture, dignity), but it is a path accessible to everyone. Regardless of the level of education or economic situation. It is the dialogue, curious and respectful of others, that can be held everyday on the streets and in neighborhoods.

The women of DREAM want to and can preserve peace and coexistence for a peaceful Guinea that sees in coexistence the key to a possible future and finds in women an unexpected strength.