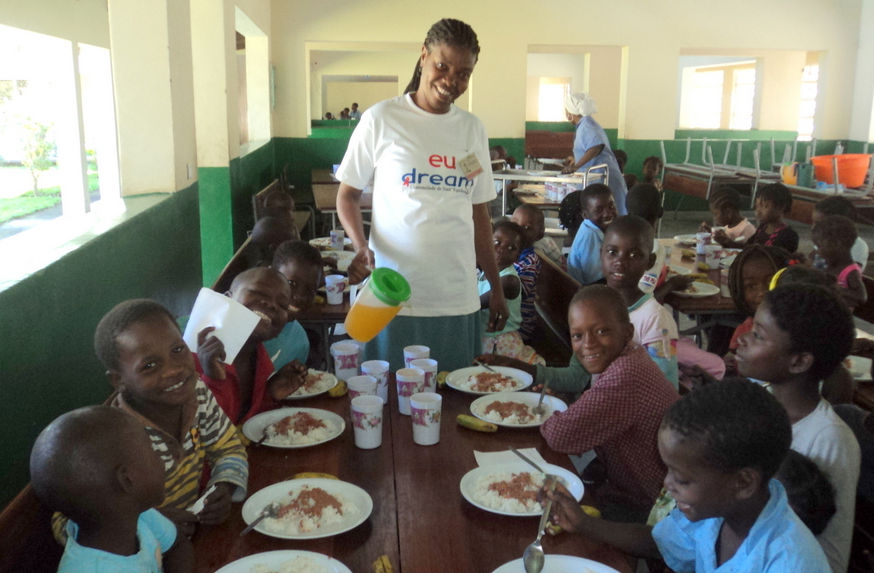 We are publishing Francisco’s story, as it was told to us by Josefa, Julia, Fatima and Odette, who are all activists in the DREAM nutritional center of the Community of Sant’Egidio in Beira, Mozambique.

“We met Francisco* in June 2015 when he was still a street kid. We started housing children and teenagers in the nutritional center in Beira, all of whom lived in the plazas in the city center.

The street is a harsh reality for too many children in Beira: when they find themselves without a family they are left to fend for themselves, wandering the streets tattered, hungry and exposed to every peril. We asked ourselves if there was something we could do for them, so we started offering them the opportunity to take a shower, change their clothes and eat a whole meal. It was not easy, because street life can turn children tough and reluctant, but  they were conquered by the kindness and the maternal spirit. A word of mouth followed, and the nutritional center increasingly became a home and a reference point that offers shelter and help, but most of all listens and accompanies them through difficulties.

We sometimes manage to find the family of origin of the children and get them off the streets.

Francisco was 7 years old but still remembers that terrible moment: him and his father arriving in the evening at the main square, him feeling lost and afraid in a large and unknown city such as Beira and his father telling him to wait for him to come back, before leaving.

Five years later, when we met him, Francisco was 12 years old and he had never seen his father or his brothers again.

Five years in the streets of Beira is a long time. Every day is a challenge, wandering around the city, looking for something to eat, begging for money. It is a daily battle, but Francisco has been winning it every day for 5 years.

But towards the end of 2015 something unexpected happened that would bring Francisco home.

Francisco had become friends with other street kids over the years, and sometimes some people even stopped to talk to him while he was begging. This is how he met another kid from Nhamatanda who was staying in Beira for a while. When the kid went back home, he told his friends about a boy from Nhamatanda who was living on the streets in Beira. His story spread around the little villages, where everybody knows each other, and it reached one of Francisco’s sisters who was staying with her aunt.

Despite the financial trouble to undertake the journey in an unknown city, the sister decided to leave in order to find this kid and find out if he is in fact her lost brother. It was a fragile hope, but she did not lose faith and left.

When she arrived in Beira, she realized that it was a large city, and finding Francisco would not have been easy. She asked around, looked everywhere, but did not find him. After three days of searching she was about to give up, but a few people pointed her towards the nutritional center of the Community of Sant’Egidio, where many street kids find a meal and a warm shelter, and told her to try there.

She ran to the center and explained us her story. While she was talking, the expression of her face suddenly changed. She stopped and called out: Francisco! Francisco had just arrived for lunch. He was lost in his thoughts but turned around immediately and recognized his sister. She was no longer a little girl, but he knew that it was her. It is hard to describe how moved everybody was in seeing them hug each other among tears and smiles, happy to be reunited again after five years.

At the center we all shared this joy because Francisco managed to return to Nhamatanda with his sister and now lives with her: he is no longer a street kid, but a kid who lives with his family in his village.

Francisco’s story is harsh. Being abandoned has deeply scarred him, but the reception of the nutritional center and his sister’s determination physically saved him and began to heal his soul.

Francisco and his sister now want to find the other two missing brothers.

We still continue to shelter and help street kids who turn to us as if they were our own: we are teaching more than 40 children and teenagers how to read and write because none of them have ever been to school. But our biggest hope is to get them off the street and find families that will take care of them.

Ambito
DREAM: not only treatment, but also the culture of living togetherDREAM 2.0, the global approach to health
NEWSLETTER