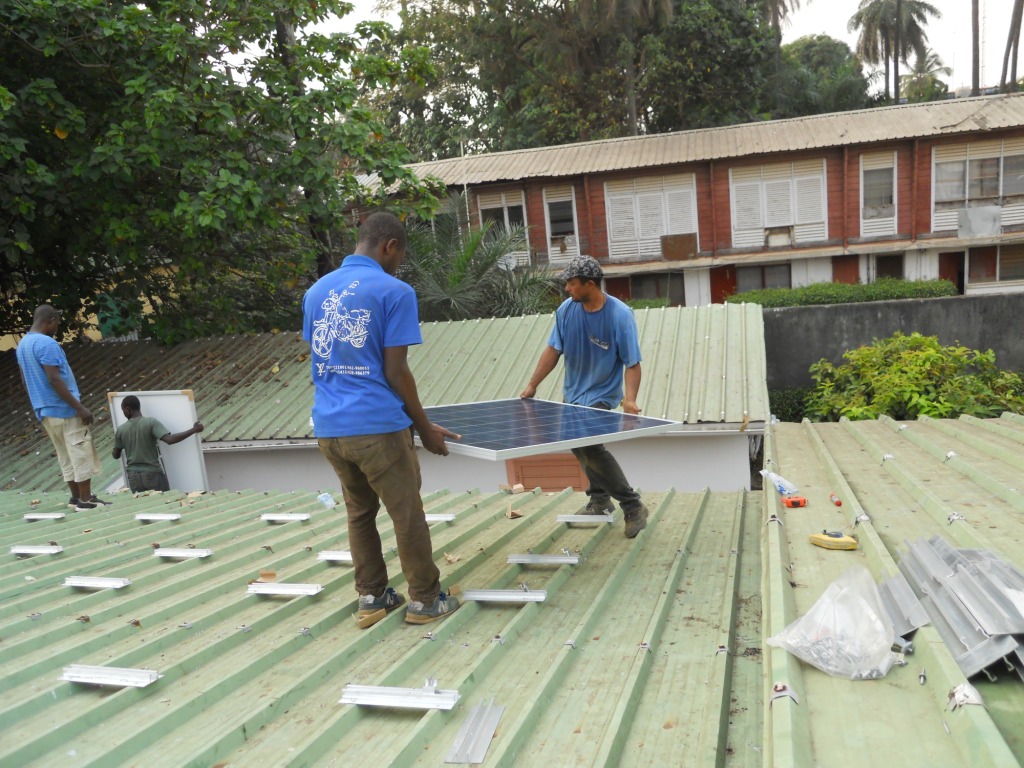 HomeDREAMSolar energy for the DREAM center in Guinea. The Community Of Sant’Egidio remains committed to achieving a better environment

2015 has been the hottest year since 1880, when the temperatures started to be recorded. Hotter than the previous record set by 2014.
It won by quite a margin, and for the first time the global temperature is 1°C higher than the one recorded in the preindustrial era. Furthermore the WMO stated that this trend has not stopped in the first months of 2016. It is likely that this will soon lead to 2016 breaking a new record.
What shocks the most is the speed of climate change caused by global warming. Many different causes are involved but human activity, as Pope Francis reminds us, is surely one of the main ones.

‘There is a very solid scientific consensus indicating that we are witnessing a disturbing increase in the temperature of the climatic system. In recent decades this increase has been accompanied by a rise in sea level and seemingly, even if a scientifically determinable cause cannot be assigned to each particular phenomenon, by an increase of extreme weather events. Humanity is called to recognize the need to change lifestyle, production and consumption, in order to fight this continuous warming or at least the human causes which create or aggravate it. It is true that there are other factors (such as volcanic activity, variation in the earth’s orbit and axis, the solar cycle), yet a number of scientific researches indicate that most of global warming in recent decades is due to the great concentration of greenhouse gases (carbon dioxide, methane, nitrogen oxides and others) released mainly as a result of human activity.’ [Laudato si’–23]

The results are seen all over the world and at DREAM we can clearly see them in Africa.

Scarce or badly distributed rain brings devastation and hunger.
Many African countries are at food risk also due to the drastic climate change. We have seen it and we are seeing it also this year in Malawi, a country with which we feel very close.
The energy production sector, among the others, has been accused of contributing to global warming and is suffering from its consequences.

Last October Tanzania had to stop for the first time all its hydroelectric plants. Not because they needed maintenance, but due to the lack of water in the basins. A sudden and significative drop of the national production of energy (35% in just a few days) has left vast areas of the country in the dark for many hours each day.

In the neighboring Malawi things did not go any better. Among the consequences caused by the cut in electricity due to the lack of production, there are those regarding healthcare. The already critical operating conditions of the healthcare structures and the hospitals are facing a difficult situation due to continuous blackouts. The stop of vital devices, the impossibility of doing laboratory diagnostics and the stop of the operating rooms have also caused deaths.

Africa is growing and so are the expectations of the African population, both urban and rural. Africa is more and more in need of energy. Possibly green and produced by renewable sources, and it must not deal with the problem in an aggressive and thoughtless way, typical of the countries of the old industrialization.

The DREAM program of the Community of Sant’Egidio continues on its path to decrease the environmental impact of its healthcare centers.

Thanks to a few sponsors, the project started 4 years ago in Malawi continues also this year in Guinea, in Conakry.

Mr. Franco Dal Dosso, an Italian businessman in the sportswear and fashion sector, has made a dream possible, one which has been for many years put aside: the installation of solar panels at the DREAM center in Dixinn, Conakry.

The experience achieved in the past few years and the collaboration with another Italian company, Riello-Aros Solar Division, has led us to install in Conakry the same “hybrid” technology experimented with success in Malawi.

The 30 kW produced by solar panels supply the essential services (testing laboratory, PC network, ICT services, warehouses, drugs and reagents, freezers and the air system) in the DREAM health center. The Aros Solar system handles the different energy sources: FV panels, batteries package, cities network, diesel generator. Although the sun is clearly the priority. When there is no sun or it is not sufficient, the system automatically takes the energy from the other available sources, leaving the diesel generator as the last choice.

The technical cooperation in loco with AMC Guinée, that managed the installation of the system, has been a pleasant surprise. Under the supervision of DREAM’s technicians, the job was fast and accurate. The first test is rarely the good one, but the system installed at DREAM in Conakry surprised us all: connected, switched on … it’s working!!

After the first month of monitoring the system, the results were more than satisfactory. The reduction in the use of the diesel generator was close to 80% and there was a proportional reduction in the use of diesel. An initial comparison with the previous data, when the solar plant started working, showed a more than 5.000kg/per month reduction of the emission of carbon dioxide in the atmosphere.