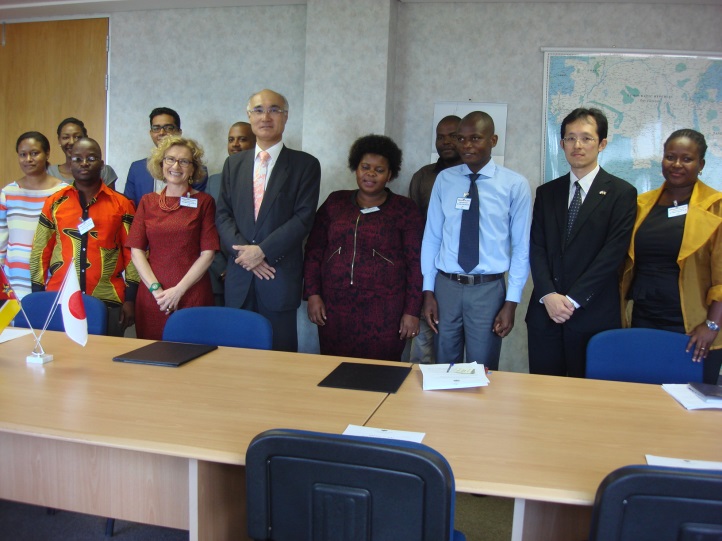 On 27 February 2017 a contract was signed between the Community of Sant’Egidio and the Japanese embassy in Maputo for the development of the ward for cancer prevention at the “woman’s health center” in Zimpeto, Maputo.

The Zimpeto area is located in the Ka Mabukwana district, in the northern suburbs of Maputo. The district’s population is of about 337,000 inhabitants, of which 60% are aged 15-64. The district is amongst one of the most populated areas of Maputo, and the medical facilities present (6 health centers and a hospital) do not suffice.
The district’s population is mostly made up of people who recently migrated from the rural areas, and there are many new residential buildings, while 13% of the homes are straw huts.

The woman’s health center is multi-purposed, composed of specialized sections for treating the HIV infection (which has a 23% prevalence amongst adults in Maputo), the prevention of the mother-child transmission, the premature diagnosis of neoplasms in women, a section for the treatment of Tuberculosis (first cause of death in HIV+ people, and generally one of the first in Mozambique), and an area dedicated to the nutritional supplements for the malnourished patients.

Within the first 3 years of activity it is estimated that 5000 HIV+ patients will undergo treatment. Every year about 500 women will be able to benefit also from the screening for cervical cancer, whose incidence in Mozambique is amongst the highest in the world (42-60 new cases each year every 100,000 women). HIV+ women have a higher risk of developing cervical cancer.

In the new center in Zimpeto, as in all other DREAM centers, the most advanced protocols will be implemented, both in staff training and in diagnostic and therapeutic standards.

The Japanese embassy has already contributed to the development of the health center of Matola 2. With the recent agreement yet another important step has been taken in the collaboration between the DREAM program and the Japanese embassy in Maputo, with the common endeavor to improve the health of the Mozambican population.

Ambito
Karibu DREAM Matteo Zuppi !Malawi, a challenge that can be overcome: From HIV/AIDS to the empowerment of young women
NEWSLETTER