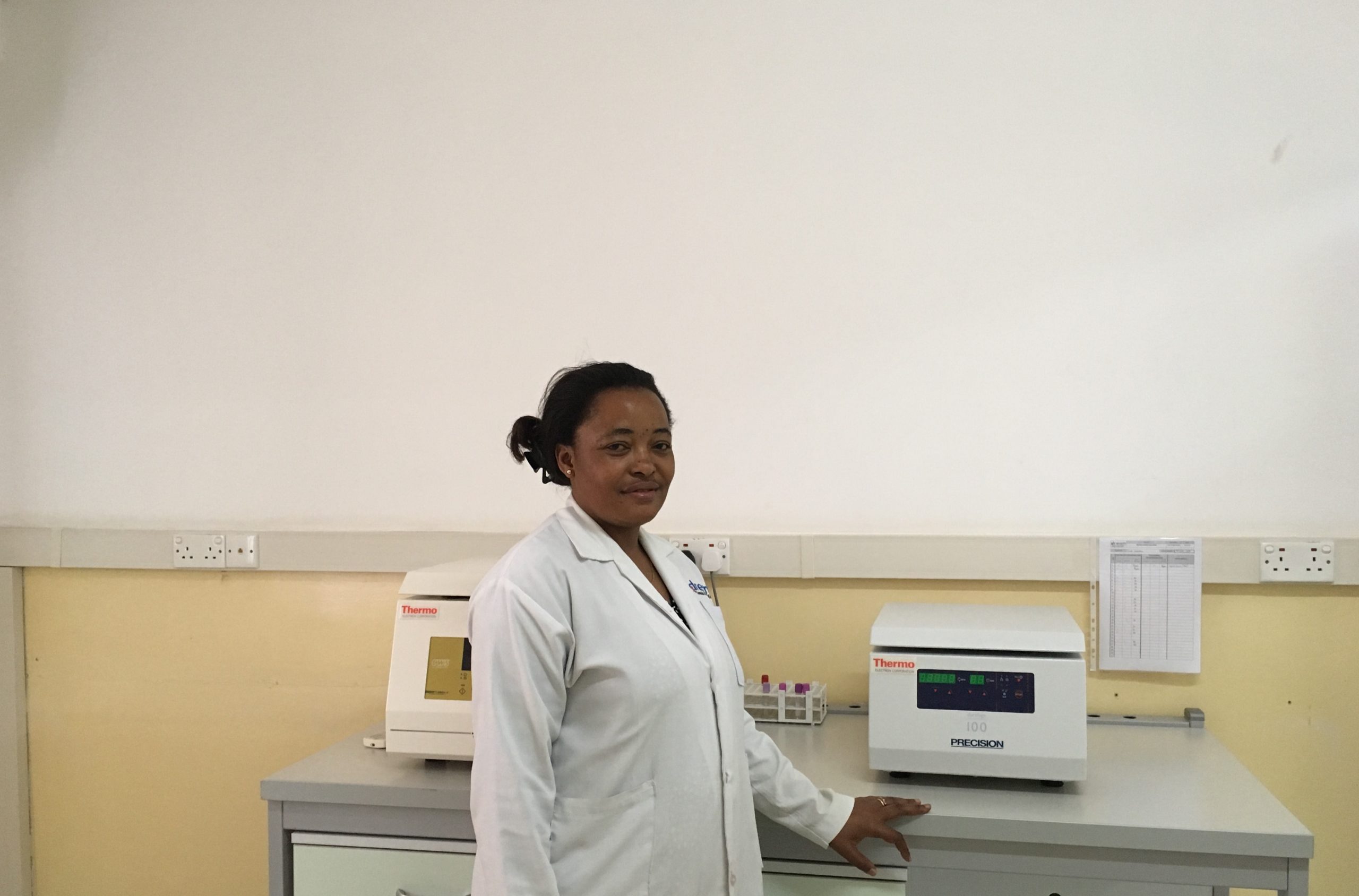 HomeDREAMEmerenciana. A woman, a mother and laboratory technician at the DREAM centre in Arusha.

Emerenciana is part of the staff of the DREAM centre in Arusha, Tanzania. Her story, as a woman, a mother and as a person with a job, is an example for all the women she meets in her work and is the symbol of how African women are fighting the sexist culture.

If you are a woman in Tanzania, as a child you were probably taught to bow in front of an older person, a priest or a mzungo (a white man). You took care of your younger brothers and sisters. You had to help and learn to be a mother, even though you were just a child and it felt like a game. Like “mother and children” with the toy kitchen. The difference was that these were not dolls but real babies and the food was really needed. Then you grew up a little, you were still a girl but you could not spend the afternoon with your friends. You were old enough to have a husband and if he did not go off and leave you alone with the children you had so soon, he will have other women. You now have to look after your home and your children, and make sure they go to school and do their homework. Like when you were little and you thought it was a game. You have to cook and manage your home all by yourself because you are alone. You do not have a job but you can find something to do from day to day, like break up stones, sell coal, or if things go well, set up a stall on the side of the road and sell the products you grow.

This is what often happens in rural areas or villages but it is not always like that. Emerenciana is a woman, a mother and she is responsible for her family. She has been a laboratory technician at the DREAM centre in Arusha since 2008. This job is considered unusual for a woman in Europe, and far more so in Tanzania.

“I worked in a dispensary and when you opened DREAM in the small house, I started collaborating and I had a great time because of the people, the mission and the family environment. The opportunity to work full time was a dream”.

The “small house” is where the old centre used to be. It is called small because it is so much smaller than today’s DREAM centre. The HIV situation in 2005, when the DREAM centre opened in Arusha, was very serious, 8 out of 10 people were HIV+.

“At the time, the only place that treated HIV was the hospital, but it had to be paid for, and most of the people were too poor so they did not get treated. HIV was and still is, albeit much less now, a taboo. Because of the stigma, people did not even want to talk about it, let alone be seen in public taking their medication. At the healthcare centre it was different, all the services are free of charge and everyone’s privacy is guaranteed. Everything from the first meeting before the medical examination, to counselling, to home care, takes place in a confidential context”.

“The DREAM staff taught people about their approach to the disease and the importance of therapy. The focus was not only on HIV patients, despite the emergency. There were also many disabled and poor people. They distributed food, they helped the children get to school, many were orphans. The disease had wiped out a whole generation and they too were sick because their grandmothers did not know how to take care of them”.

Emerenciana does not only work in the laboratory, she is the person who takes the blood samples, she talks to the patients and she knows their stories and the results of their check-ups.

“The check-ups tell you everything, the viral load tests are carried out once a year and if the result is very high, six months later. We understand whether and how the treatment is being taken. Sometimes the patients lie. Sometimes the therapy does not work, the virus creates drug resistance  and the therapy has to be changed, but in most cases it is because the patients do not tell the truth ”.

“It’s difficult for them. They go to school, they sleep there and are ashamed to take their medicine, so they don’t, and they risk their life, or getting very sick. One Sunday a month we organise a meeting just for them, where we tackle these issues, how to break down the taboo”.

Emerenciana faces many work and life challenges every day but she also has plenty of wonderful experiences.

“One of the best moments was when we moved to the new centre. This meant we were no longer a project. We were really there, it worked and we were going to stay there. That unforgettable moment meant that the trial run was over, the DREAM centre was permanent”.

Emerenciana impresses people because of her enthusiasm and her positive approach, also as far as women are concerned.

“More and more women go to school and they share the work with their husbands, many start small businesses, they sell the products they grow”.

Then she picks up her cell phone, switches on the screen and smiles. I can’t help but look, it is a photo of her children.

“Look at me. I have a job that I am proud of. I wanted it so much and I am always learning, keeping up to date. I did my training in Malawi and in Iringa, I use new software. It is a stimulating job and it makes it possible for me to support my children and provide for my family. They are the proof of my improvement”.

She looks at the time, “Come on, I have to show you the small house before it gets dark. It is important to remember where you started, so you can appreciate every single, small step forward”.