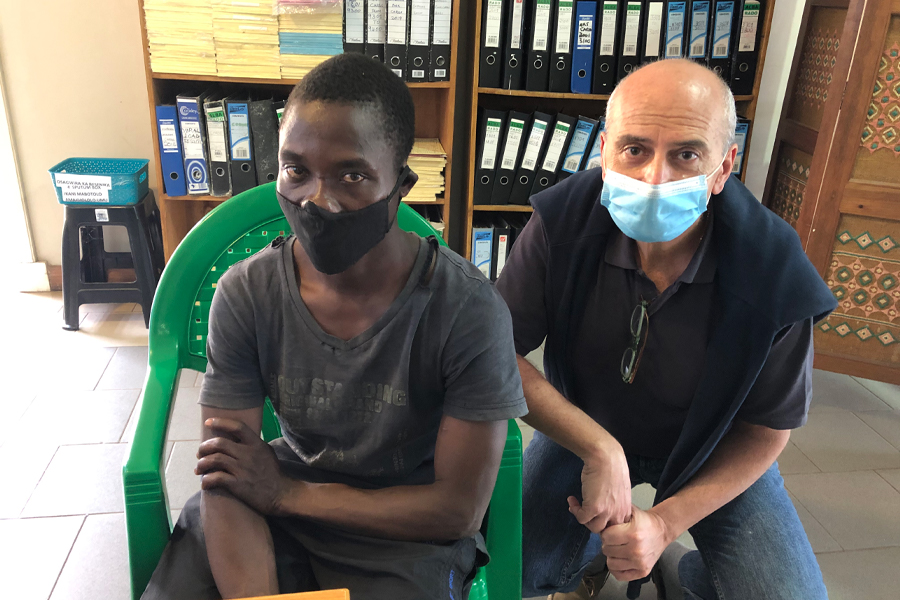 We met him on the side of an isolated, side road, a shortcut to get to the DREAM centre in Blantyre, which people take in order to avoid the traffic on the city’s main roads.

He was face down in the dust and was having a seizure. He was alone, there was nobody around. By the time we stopped the car and went to help him, his convulsions had stopped. He gradually regained consciousness but he was disoriented. As the minutes passed, he came to his senses.

Charles was scared, his threadbare clothes, like his torn t-shirt, told us about his life as an outcast. He couldn’t believe that someone had stopped to help him. We took him to the DREAM centre, where he was welcomed with kindness and warmth. He was shy but we listened to his story, which he told us in a whisper.

He lives in a village far from the big city of Blantyre and he had recently come to the city to try and get paid for some work he’d done a long time ago. He’d been fired as soon as his employer found out that his was epileptic. He went to the police but all he could get was a vague promise from the employer. He’d been wandering around the city for two days because without any money he couldn’t pay the fare to get home. He had also run out of his medication, which was why his seizures had come back.

Charles is just over 20 years old, he grew up with his grandmother, who he still lives with. He never met his parents, they died when he was only a few months old. Charles is also HIV+. A while ago he came to look for work in the big city, Blantyre, and thought that way he’d be able to hide his double disease, his double stigma: nobody offers work to an epileptic, let alone an HIV+ epileptic. He couldn’t go to school because epileptic children are often seen as possessed or cursed and therefore to be avoided. Often even whole families are isolated, “They must have done something bad and are now getting the punishment that’s due”, and it’s best not to have anything to do with them. If the patient is a woman, being isolated exposes them to abuse: a lot of epileptic women get pregnant with no father to recognise the child.

Epilepsy is widespread in Malawi and in the whole of sub-Saharan Africa, 5-6 times more so than in other continents. Over 80% of the patients have no access to treatment. Epilepsy kills more people in these countries than anywhere else, and people drown or die from the burns they get from falling into the brazier, the centre of life of the African family.

Charles had never been seen by a neurologist, or even a family doctor. We explain that he does not have this problem because he is cursed and that medication and regular medical examinations can free him from his seizures. He finds it hard to believe that at DREAM, the medication, visits and tests are all free of charge. In Africa you have to pay for everything.

The medical examination ends with an electroencephalogram, which is possible because of the sophisticated equipment that some Italian neurologists gave the DREAM centre in Blantyre. The result of Charles’ test is sent to the specialists in Italy through GHT telemedicine, and they respond in real time. We tell Charles again that if he takes his medication for epilepsy regularly, he will have a life free of the awful seizures that upset and frighten him and the people around him.

A new life is possible for Charles too, a dream with DREAM

Ambito
Covid-19. An interview with Dr Nurja on the situation in MozambiqueThe DREAM programme is supporting the vaccination campaign and equal access to treatment in Africa
NEWSLETTER