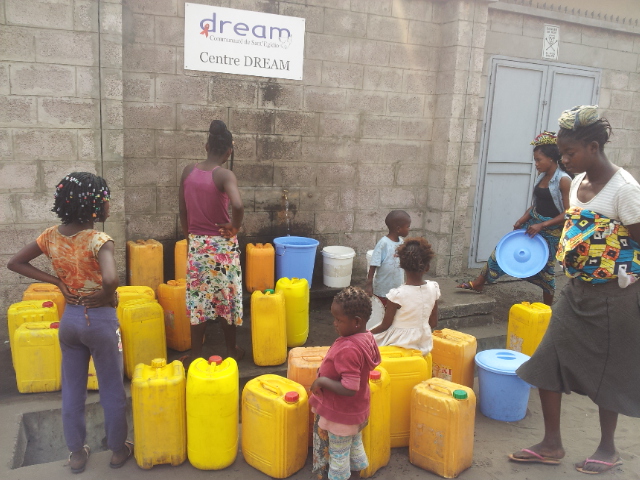 Have access to clean water in the world, and especially in poor countries, means ensuring the right to health. A right often denied to the people of the poorest areas of Africa.

In Sub-Saharan Africa, about one third of the population still has no access to drinking water; (Joint Program WHO / UNICEF for the supply of water services and public hygiene (Joint Monitoring Program for Water Supply and Sanitation). WHO/UNESCO (2010). Progress on Sanitation and Drinking water: 2010 Update. Geneva: WHO Press)

Not having access to clean water means increasing the risk of suffering from gastro-intestinal diseases that can be quite serious; it is enough to consider that 16% of child deaths globally are caused by diarrhea.

To get water for themselves and the family is quite a job, especially for girls and young women, who therefore drop out of school in order to cater to this precious liquid; also, every day it is needed to face a journey of several hours. UNICEF data says that the search for water does absorb 40 billion hours a year, and in fact, for 71% on the shoulders of women and girls.

Even inhabitants of large cities have difficulty in being connected to the water distribution networks, but not only is the number of inhabitants supplied with water low, but the supply itself is sporadic, especially because of the state of decay of the pipes, and the bad quality of the water.

As written by Pope Francis in the recent Encyclical “Praised be ” Clean, drinking water is a major issue, (…) A particularly serious problem is that of the quality of the water available to the poor, which causes many deaths every day. (..) While the quality of the available water constantly gets worse, in some places there is a trend to privatize this scarce resource, transforming it into a commodity subject to the laws of the market. In fact, access to clean and safe water is an essential human right, fundamental and universal, because it determines the survival of the people, and this is a condition for the exercise of other human rights. This world has a serious social debt to the poor who have no access to drinking water because that means denying them the right to life which is rooted in their inalienable dignity.”

This is why DREAM in Kinshasa, in the Democratic Republic of the Congo, has been providing already for some time free water for families in the area, from the well dug to supply the DREAM center in the neighborhood of Bibwa. It is possible to go every morning to the gates of the DREAM center and access the fountain that draws water from a deep and safe well, thanks to the technological equipment installed at the center, which has become a new service for the population of the district, where there is still an aqueduct and the water needs to be bought. Everything has to be paid in Kinshasa, even a glass of water, in a country where it is rather hot for most months of the year!

Therefore, the DREAM center in the district, which from the start has meant the rebirth to a new life, new hopes for development, and access to free health care, has taken on the meaning, with the possibility of access to drinking water, of a real “village pump” around which we celebrate the joy of life.

Ambito
Humanitaire : SOS pour le Centre Dream !Towards the future with a bigger dream. DREAM 2.0, that is Disease Relief through Excellent and Advanced Means
NEWSLETTER