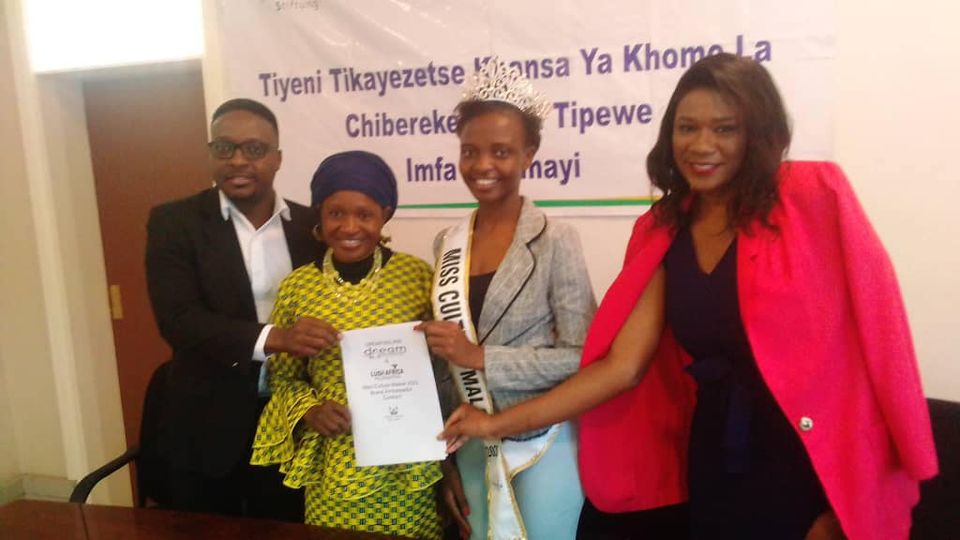 Miss Culture Malawi Memory Sanjira yesterday signed an agreement with the Community of Sant’Egidio’s DREAM Programme as an ambassador in the fight against cervical cancer. Her role will see her spreading messages to the masses about cervical cancer, in line with the theme of this year’s pageant: ‘Collective culture conquering cancer’.

Speaking to the press after signing the agreement at St Egidio’s DREAM Community at the Mandala in Blantyre, Sanjira promised to put all her energy into the awareness campaign, stressing that she has a big task ahead of her. “It is a great honour to be part of this partnership with Dream and it is about beating cancer through awareness, to make women understand cervical cancer better. They need to get screened and know their status,” said the beauty queen, who was crowned last month.

Executive director in Malawi of St Egidio’s DREAM Community, Dr Sangare Hawa Mamary, said this was Sam Banda Jnr’s first time and it was a pleasure for them to have Miss Culture Malawi as an ambassador for the fight against cancer. “We have been making appeals about the need for multi-sectoral collaborations in the fight against cancer and also, we know where the high cancer burden comes from and the fact that there is no awareness and we know that with Miss Culture Malawi we will reach more people,” Mamary said. She went on to stress that the aim is to reach rural areas. “Because Malawi has a high incidence of cervical cancer and yet it is a preventable disease and moreover, when screening is detected early, treatment is available but people don’t get screened and the disease has a slow progression which can take longer but people don’t know,” she said.

Mamary added that to achieve cancer elimination globally, there is need to work hand in hand and national accountability “because cancer affects everyone,” and admitted that the cervical cancer situation is not healthy, saying Malawi is among the countries with a high disease burden. “All pillars need information and awareness to eliminate misconceptions. Many people don’t want girls to get vaccinated so Miss Culture Malawi and the media can help with that,” Mamary said. She concluded by saying that DREAM, through its Programmes, is there to complement the efforts of the Ministry of Health